Welcoming Problems in your Relationships is an Opportunity for Growth 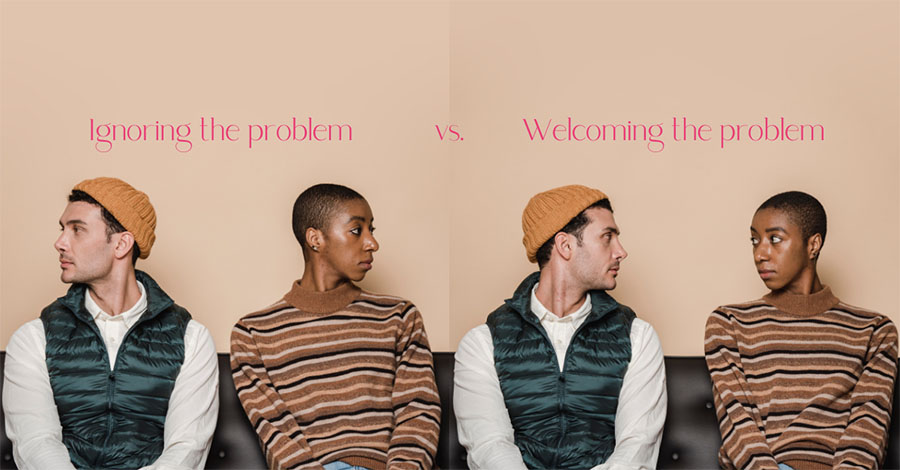 It takes real courage to take responsibility to mend ‘patches’ in your relationships, and it brings with it valuable lessons that we don’t often learn anywhere else. Strong and lasting relationships need boldness and hard work, but for most of us, knowing this doesn’t mean we act from it. The perfect relationship, conflict-free, is also a myth.

Having issues in the background of a relationship causes discomfort and worry for many people, yet we often prefer to avoid rather than confront these issues. We have good reasons for avoiding them, which help us justify our lack of attending to them. The reasons include, but are not limited to, not wanting to waste valuable time, a fear of upsetting others, a concern about losing focus, a fear of not being capable of resolving the conflict, the fear about receiving negative feedback, or sometimes simply being in denial about the existence of problems.

We can also prefer to remain silent for fear of dealing with the emotions that arise from an anticipated conflict – anger, resentment, anxiety – which arise when we approach our friend, colleague or partner and speak up about the problem. Ultimately, we understand instinctively that putting off problems makes things worse, but that doesn’t necessarily lead to the courage required.

So, what is the best way to get over these hurdles so we clear out the cobwebs in our relationships and effectively deal with the issues that can diminish a relationship over time?

I was raised in a “positive” home. It was a “look on the bright side,” no-complaining kind of family culture. I grew up believing there is a bright side to everything and thought this was the ‘right’ way to behave. While this attitude generally occurs as a strength of mine, to see the good or positive side of things, it also causes me to look away from conflict periodically.

What I didn’t realize until much later in life is that this outlook didn’t always lead to the best course of action, and certainly wasn’t very conducive to confrontation. Whether you share this orientation (“Always best to look on the bright side of life!”) or naturally want to dispute it and label it as spin, we can probably agree that this kind of positivity has its strengths and weaknesses.

One of the strengths that comes with the ability to see things in a positive light is having an upbeat demeanor, particularly in the face of challenging circumstances, which can translate into a tolerance of people and certain situations when they arise.

A weakness is the inclination to avoid or ignore problems, to look the other way, and this resistance encourages its persistence, a likelihood that a particular issue or problem shows up repeatedly in many relationships.

A reason to embrace conflict

As a coach, I support people to embrace issues rather than avoid or downplay them. The failure to resolve a problem, especially when it involves someone we care about, can undermine a relationship’s very foundation, magnify it, and become a proverbial ‘thorn in the side’ that festers, whether we recognise it or not.

Do you ever find yourself postponing discussions of problems?

Dealing with problems in a timely manner obviously supports all kinds of immediate outcomes, and can help short circuit the pain or discomfort of a conflict in real time. It also allows for transformative change over time. Instead of coping with discord or a grievance that persists in the background, tackling an issue is an opportunity for understanding and growth.

Do you ever convince yourself that a problem isn’t worth chasing?

Consider a person with whom you recently disagreed with or had a run-in. Did you persuade yourself that the problem wasn’t significant enough or that it didn’t on balance warrant the trouble it would take to remedy it? We frequently convince ourselves that the issue is unimportant or that we don’t care enough about the other person to settle a dispute or conflict. We may even tell ourselves, “It’s their problem to fix, they caused the problem in the first place.”

Beware, if any of this happens to you on a regular basis, with any relationship, it may be in the DANGER ZONE. Justifications are a trap which can take a serious toll on relationships, both in our lives and in workplaces.

If you value connection and affinity with those you live or work with, I’d encourage you to think about another option that will significantly improve the depth of your connection with people – I call it ‘welcoming the problem. It doesn’t come naturally to most people, but it’s a desirable perspective to cultivate because it brings with it a variety of important abilities. Welcoming the problem, a context that is created and can supplant our naturally reactive ways of operating, is generative in nature, but it must be cultivated, and is not necessarily easy.

I recently was working with a newly engaged couple. Together for only nine months, they’d noticed an uptake in disagreements of late. It seemed they were having to navigate situations that hadn’t come up before, which was creating new friction in their relationship, and were struggling to deal with the associated stress. While at times they were tempted to let the conflicts slide, they both knew better than to do so and came to me for support.

Recognizing a real opportunity for growth, I encouraged them to dive in deeper, revisit the scenario and take a closer look. So, we began by examining the dispute in greater detail – who said what, what were the friction points, what did they decide about each other’s perspective? They described the circumstances and how the argument unfolded from both points of view. We talked honestly and openly about the emotions and worries that surfaced, and what they had employed to cope with the situation, some of which surfaced only after recollection.

Like most arguments, the circumstances that started this one were simple, but nonetheless launched a barrage of emotions and intertwined upset. This one had arisen on a late Friday evening as they were preparing for a weekend adventure away, and what constituted “ready” was very different for each of them.

On his part, there had been pledges made, his partner’s associated expectations about how things would be looked after, and where he hadn’t kept his promises. She was disappointed, and because her modus operandi is to “do whatever it takes” to reach a deadline, she found herself springing into action even though it was really late, and she was exhausted.

The tension that had been present the night before was evident. Without seeing each other’s viewpoints and commitments they had made to each other, there would be no real appreciation for what was thwarted, or what could be done better in the future. Sometimes examining how things happened can only happen in a less charged environment. Eventually, with the support of a facilitated conversation, they began to appreciate each other’s perspectives and the anatomy of the dispute.

The Outcome: What we think will happen

Rehashing a disagreement seems like the last thing you would want to do, especially in a new relationship, for fear of ‘ruining’ things. By being honest about your thoughts or judgements you have of your partner, you risk exposing yourself. So why go there? Many people would like to leave this disagreement behind, even if it remains unresolved, because doing so seems simpler or a way to forget about it. The problem is that you don’t — even if you superficially believe you do, instead it adds another brick to the wall that can eventually divide us from others.

The Possibility: What actually may happen

Clearing the air is rejuvenating, and can have the opposite effect to what you think will happen. We all feel better when we come clean, a weight lifted off our shoulders. The thing you think you are hiding from others by not saying them directly (so they don’t see your nasty side) comes through in the undercurrent anyway. But when brought out in the open, it can be oddly freeing for people to ‘own their stuff’ — the stuff we feel ashamed about.

Under wraps these judgements seem ugly to us, but out in the open they become human foibles. As we are all fallible, a willingness to bare our imperfect side frees us up, and in turn opens those around you to their own humanity and limitations.

Welcoming the problem takes trust and a willingness to embrace one’s humanity. To give up perfection and embrace imperfection, and suspend a temptation to ‘see things in a positive light.’ It allows us to confront how things really show up for us and tell it like it is.

Using conflict as an opportunity to deepen a relationship is truly worth the investment, whether it be in a personal or professional relationship. It will look a little tamer in a work setting, but the principles are the same.

Is there a relationship in your life, numbed or off kilter, that you can bring back to life by ‘welcoming the problem?’